“The price good men pay for indifference to public affairs is to be ruled by evil men.” ― Plato

It is a wonderful name, and even though I was there, the wonder of it didn’t rub off. It is a tendency of locals to stop thinking about the meaning of the word and just to associate the thing with what they know. I used to live near Golden Valley, Minnesota and never thought anything about it till one day I read it in Steinbeck, and how it struck him as an interesting place for its name.

A How It Is Paved

Campoalegre is all paved with concrete roads. I’ve never seen a better paved town in this country. I am not sure what the story is behind it, but the effect is that it is hotter than formerly, and that everybody gets around on motorcycle.

Of course, that last is speculation (the first being told me by one who ought to know). I can’t imagine there being as many motorcycles in the past, and with the rains of a rice growing country, dirt roads mostly cannot have encouraged motorcycle use.

I wondered if there were other cities in Colombia with as many motorcycles. I doubt it. Everybody, even grandma, has a motorcycle or scooter there. In Colombia there are laws about helmets and vests. You have to wear a helmet with the license plate number of your motorcycle on it, and a vest with the same. And everybody on that motorcycle has to have matching numbers. It is enforced in Bogota for safety and to lower the amount of robberies. In hot weather, they’re more relaxed about the helmets: they’re more open, smaller and sometimes are just baseball helmets. In hot weather they’re more relaxed about the vests, at least in small towns.

In Campoalegre I saw maybe two helmets and one vest. It is still the law but universally ignored. I heard someone suggesting going into business selling helmets; how would it work? You give the mayor a 10% cut so he’d start enforcing. 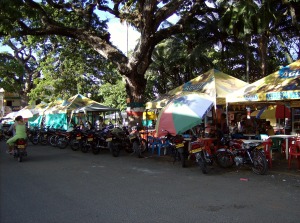 I saw a family of four on one motorcycle. I actually think I saw more motorcycles with 2 or more mounted than I did with just one person. They hop on anyway, sidesaddle, legs dangling, with baskets, with boxes, with a small kid or whatever, and jounce around town. And die. Most motorcycle accidents have serious injuries and fatalities, but they go on the same.

B How It Is Warm

Warm climates have their own rules. You don’t wear shoes there very much because it is just too hot. Everybody wears flip-flops, sandals and the like, and for all my scruples, I understood why. People in the US wear flip-flops, I am convinced, because they’re feckless and because they enjoy it as an act of bad taste. Not in Campoalegre, though I doubt they have anything against the commission of acts of bad taste. Wearing shoes is just unpleasant, and the roads are all paved. When I was going around barefoot uncle George commented how I was all Campoalegre. That’s how he grew up, and what great stubbing of their toes they used to give themselves.

So warm, they don’t use hot water for showers. There’s just warm water from the tank, depending on the time of day and if it has been a hot day. It might be cool water if the day is cool. I doubt they ever get below 70 degrees there since being 500 meters above sea level and closer to the equator than to Bogota kind of lends itself to warm weather. I’d be surprised if in the whole town there was one water heater. I’m pretty sure that in the whole town there weren’t any air conditioners!

C How It Is Pleasant

What mitigates the heat is the rain, which is welcome there and warm. It rains pretty well in rice-growing country, although they have a dry season in January too. Also the acacias which spread out to give shade, the ceibas, the mango trees, and all such growing wonders help with the heat. The fact that they don’t wear many clothes also mitigates the heat. When we were under the great trees along the river wearing bathing suits we were not troubled by the sun shining and the day warming up.

They have some old houses there, though hot weather country isn’t the best place to look for old places. They live so simply, needing mostly only a roof for the rain now and then, that one can imagine that for centuries people have been living under thatched roofs held up by poles. What use architecture? They live in brick houses now, and have metallic roofs, and one really wonders why. But the older houses are probably cooler: all high ceilings, little round holes at the top to let out the hot air, slumping tiled roofs, thick, stubborn old walls that change temperature with reluctance, and a lot of life taking place in a courtyard or back yard. 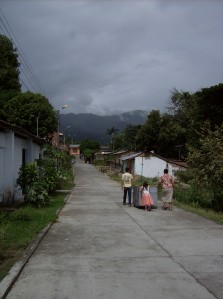 The strangest thing about being in Campoalegre, is that I left with the notion I would enjoy a prolonged stay there.